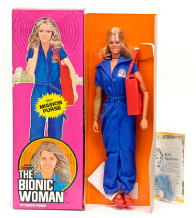 Picking my favorite female superhero and writing about why I idolize her was a difficult assignment to get started on — my head was empty of ideas. Rather than adhering to the exact super-heroine topic, I decided I should just go with free-style stream-of-consciousness writing (as opposed to investing hours of time researching and crafting a grammatically perfect and succinct on-topic treatise). That is, I am just going to Move-Girl-GO-with-the-flow.

The first thing that comes to mind is Cat-Woman, simply because I am a huge fan of cats. My current cat is particularly enchanting, and I have been hoping for an opportunity to be able to somehow mention her in my MoveGirlGO writings. My cat wears a super-hero costume of pure white fur with eerie light green-yellow eyes. She is a stray of unknown origins, presented herself at my door, and won my heart — that’s kind of a super-hero story-line. I have dubbed her: Pallorina, Princess Ghost Kitty — which surely qualifies for super-hero status.

Moving along, I’d like to acknowledge Snow White as a super-heroine — she confronted and conquered males representing some bad qualities that we females often encounter: Grumpy, Sleepy, Bashful, Sneezy, Dopey . . . However, contrary to Snow White’s experience, please remember that juicy red apples are a good nutritious treat. Recent Snow White movies have morphed Snow White into someone ultra-cool and not-to-be-messed-with.

I also admire the Rapunzel heroine, especially as depicted in Tangled, because she’s a super-good reminder of the importance of maintaining a healthy head of hair.

Finally, I’m giving a shout-out to the Jessica Rabbit character for being utterly ground-breaking (and because I’m saddened by the recent passing of Bob Hoskins). 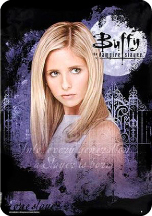 I had a tuff time thinking of a lady superhero that I’ve spent time being entertained by. Until my husband reminded me of my long time obsession…Buffy the Vampire Slayer!!! I’ve watched every season’s episode and loved every campy, vampy moment. The show ran from 1997-2003.

Buffy, a teenage girl, had special powers- super strength and the ability to intuit who among the populace of the little town Sunnydale were supernatural evil dudes, and get rid of them for good.

Sarah Michele Gellar played a great Buffy. Wise cracking her way through battles with ugly vampires. She saved the world and humanity over and over. The show is fun to watch even though it is so improbable. I dislike thrillers and horror shows, but this is not at all frightening, in fact I laugh at a lot of the effects.

Check out all the seasons on Netflix and you too can enjoy, Buffy the Vampire Slayer!

When I received this assignment, I thought of a few female superheroes, but the one I wanted to describe was CATWOMAN.

Now, why would I, of all people, choose a female superhero in the form of a cat? I, who am so allergic? Don’t those creatures make me break out in a horrible rash? Yep, but I continue to draw them, pet and scratch them—and even have been known to attract the neighbour’s cat and entice others to play. All the people in my family have cats as pets, but not me: I have my relationship with cats on the sly.

Speaking of Catwoman, unfortunately the film that springs to mind was the one starring Halle Berry—which, alas, has been included in the list of the 50 worst movies of all time, whose “stench of the litter pan is all over this 90 minute disaster”.

However, as far as cat-like qualities, and that’s what I’m aiming for here, I was treated to some great snarling, hissing, leaping and pouncing moves. What really engaged me was the whole transformation story of the main character, Patience – into Catwoman. Patience was timid, shy, just bumbling around in her job. After the transformation she is quick-witted, fast, knows her own mind—gets a brand new hair do and outfit to match—no longer the shy retiring type. She’s got extraordinary powers and isn’t too timid to use them, and as far as the job working for the bad guys? They are history.

Oh, and there is another aspect of the movie that I’ve not alluded to: Patience, and then Catwoman, gets the attention of a detective. Their relationship becomes amorous (purrr), but in the end Catwoman walks away, aloof, strong and independent. Nothing wrong with being strong and independent, right?

Other cat-like moves that can be emulated, not just from scenes in the movie, but in real-life – things that I’d like to have: changing from shy and in the background to bold when the need, and mood arises. Bonus: having quick reflexes, being stealthy, sleek, powerful, dangerous, always landing on my feet—ready for action.

All those moves of strength, agility, and flexibility, mixed when necessary with hissing, growling and snarling—and a bit of purring on the side—all help a girl adapt to today’s challenges.