I’ve only taken one, what I would call risky, adventure. Bungee jumped off the Zambezi Bridge. My boyfriend and I were checking out Victoria Falls for a few days and we decided to take the leap. We spectated a while, watching people drop backwards, leap and soar, or simply topple over the edge. Getting all wrapped up with bungee gear, I didn’t question my decision to jump for no reason other than a good time. Standing on the platform I still didn’t think “What in the hell am I doing?” I remember holding onto the railing and checking out the gorge and the river boiling below. I did think about crocodiles in that river, but I didn’t think about not jumping or what risks were involved in jumping off a bridge tethered by my ankles with a giant rubber band. 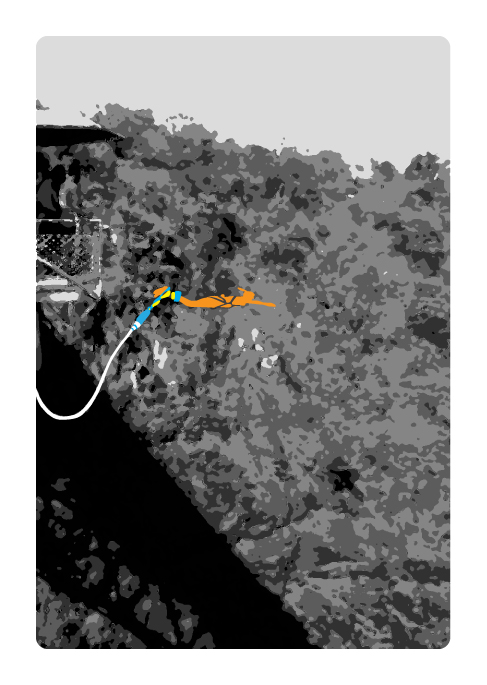 My boyfriend had gone first and I watched and listened to him holler all the way down, and then laugh as the elastic cord did it’s job. My turn, and the dude that helped me shuffle to the edge of the platform also shouted out the countdown to jump. And I leaped off the edge, my arms outstretched like I was going to hug the Zambezi. Falling, falling I didn’t blink so as not to miss this new perspective. I felt like I could easily be a brown hawk soaring over this wilderness with this awesome bird’s eye view. When the rope met it’s full twanged out length I felt some disappointment that my free fall was over. The elastic cord shot me back up and this time I was facing up checking out the sky and the underside of the bridge. I was bounced around a little while longer, my eyes still bugged out checking out the river and the gorge. My risky adventure was over pretty quickly. It was an incredible experience.

Now the risks I take are mundane. Trying out a new dish in a restaurant. I took pole dancing lessons a few years back, more absurd than risky. I did a handstand and dropped into a backbend and then stood up from the back bend- felt pretty risky- in a yoga class last week. Went swimming in the sea during shark week. Yep, that was living on the edge. I can scare myself into and out of all kinds of what I consider risky moves. What I consider a risk another may scoff at. So while my obviously risky adventures count is low, my mundane risk taking adventures are way high.