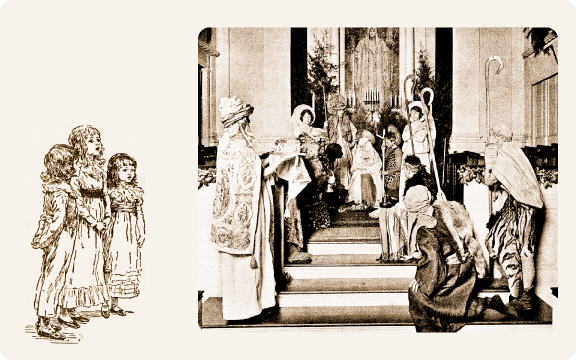 A childhood memory that stands out is being part of the junior high school choir—I was actually chosen for the alto section since I had such a bellowing (tuneful) voice—and for such a little kid at that. We joined with other school choirs and sang Christmas carols at the Oakland auditorium. I believe we even got to wear white robes—quite angelic, and sang songs like O Holy Night and Joy to the World.

Then there’s a bleak period of about 18 years when Christmas meant uncertainty——pretending that Christmas only happened in others’ homes and that it didn’t matter if we only participated as the whims directed. Not exactly the stuff from which warm fuzzy feelings contribute to good will and peace on earth.

A snippet of a conversation that occurred a few times during those years:

And now for some blissful scenes of recent past Christmases. The decorating and preparations for the holiday season—going into all the cupboards of the house to get out all the festive garlands, ornaments, tinsel, bows, lights, wreaths—you name it; our house was covered: going up the bannisters, around doorways, hanging on curtains, all over the furniture, with a special center piece on the dining room table. We’d go select a huge Christmas tree, spend hours decorating it, watered it regularly and started arranging the presents.

One of the best Christmases was when my two daughters, son in law and two grandchildren came for the holidays. One memory that stands out in my mind is the tree—one could hardly see it for all the presents loaded up underneath. Then there was the mirth around the table at dinner time! Loads of photographs taken, everyone looking quite jolly. Precious times as they don’t happen very often.

During the last few celebrations in that house we started making Christmas gifts; that became traditional after 2008—no more big bucks spent on store-bought presents. Mike and I bought all the containers and ingredients for concocting mustards, cashew butter, and all sorts of cookies and bars—then spent hours making all sorts of goodies, putting custom-made labels on everything.

The past couple years have changed a bit, and Christmas time has become a bit more mellow for me. Oh, it’s still happens, but not to the grand extent that it once was—and, as Mizzfit suggested—these are times to start new traditions, adapt to new situations and still continue to embrace the fond memories.