I think that stamina starts in the brain and gets filtered down, around and through all our joints, bones, and muscles until our bodies get the message that it’s time to get started, to keep going, to get finished. I can get through most of my workouts without quitting midway. I admit: it’s not the finishing that’s the problem: it’s the starting! 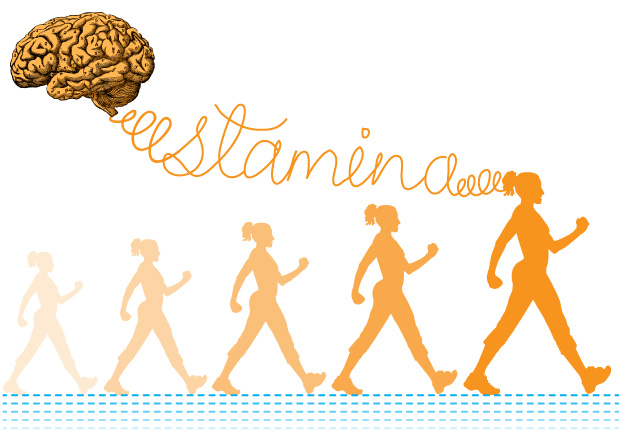 Sometimes—but not that often—during a yoga/weights session — I get a bit dizzy and get the clammy shakes. Instead of wimping out, I’ll eat half a banana, lie down for a bit, giving my body about 5 minutes to get its equilibrium back—then carry on from where I left off.

When learning about this week’s theme of stamina, I thought about professional athletes and how they rely on a team of people who cater to their every physical, psychological and emotional need. Realizing that I’m a mere amateur mortal, and that stamina is largely in my head, I have discovered that when I control my mind through harnessing energy with positive images, I can more than manage a workout routine.

I recently took part in my very first 5K Turkey Trot, and was able to walk it in a bit over an hour. In the days previous to the event, I took more walks and trips to the gym, trying to increase the pace—and the stamina. Also, I discovered that sharing the training and the event was much better than my usual solo workout routines: it really helps even amateurs to be surrounded by persons who have similar goals.

The accomplishment of participating in a group event has spurred me on to increasing my pace and distance. But what about pain? Yep, it’s still there, but if I don’t focus on the twinges in my various body parts, the workout can result in less pain down the road—my head has to challenge its body to remain positive. I’m aware that I’m stronger now than I was a year ago, and that even more strength—and stamina—is attainable. A simple, but difficult goal: Never Give Up.