It seems to me that men especially like to try out the newest inventions. I grew up in a house where my otherwise frugal stingy tightwad Dad would splurge on gadgets, and we were among the first to get a blender, rotisserie, battery-operated eraser, etc. Around 1960, before ‘foreign’ cars became commonplace, my Dad rebelled against poorly-made gas-guzzling American cars and started buying imports — very few people have even heard of some of the cars he bought: Opel, Borgward, Isetta. Today, we would call him an ‘early adopter’ — a person who starts using a product or technology as soon as it becomes available (actually, this term originated in the early 60’s).

I did not inherit the gadget gene. Most of my gadgets are hand-me-downs or gifts. The gadget that I’m currently using almost every day is a crockpot that has been around since the 70’s, passed on to me from my mom when she upgraded to a better one. This is an original, genuine, Rival 3-1/2 quart with non-removable crock. 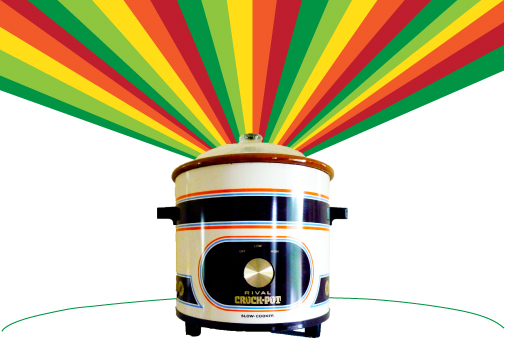 Currently these babies sell for about $40 on Ebay, but also can be found for cheap at thrift stores. I hadn’t used it very much until just recently. But, it did get a lot of service in the late 90’s when a gal was living with me who was starting a business doing facials, and she used my crockpot for warming up towels — it worked great!

Nowadays, while my kitchen is being remodeled, this crockpot has become my main source for cooking, and I’m especially impressed with how hot it gets and how fast it cooks up a batch of soup. On the high setting, even when practically full, it will bring the soup to a nice slow rolling boil in about half an hour, and it’s thoroughly cooked about an hour later — about the same as stovetop soup! Admittedly, I’m not using it as a slow cooker, but I don’t really trust leaving it for 6 to 8 hours or more on the low setting and coming home to who-knows-what result.

Just now, while trying to figure out how old this relic really is, I ran across Internet conversations about the lead content of crockpots leaching into the food. Of course, now I’m starting to worry. I guess it’s not uncommon that gadgets can end up killing us. I could try to get ahold of a hot plate, but it seems like that might be a fire hazard. Or, maybe I should switch to a ‘raw’ diet, which sounds like it could be gadget-free.