Sometimes I find myself becoming incensed about something I am being asked to do, and I immediately go into procrastination mode. All I can think of is how to get out of the task or defer it ‘til it goes away. And, I usually want to object/complain/moan to the originator of the request and maybe even start writing an email with an angry retort, which seems like a good procrastination ploy, but a really bad idea. While in a negative reactionary stage, it’s especially inadvisable to write emails, as I’ve learned from experience — both sending and receiving. So the next best thing is to gripe to myself in my journal instead. Yes, a very good method of procrastinating is to think of something else that’s more important, and we can all agree that journaling is super-important. 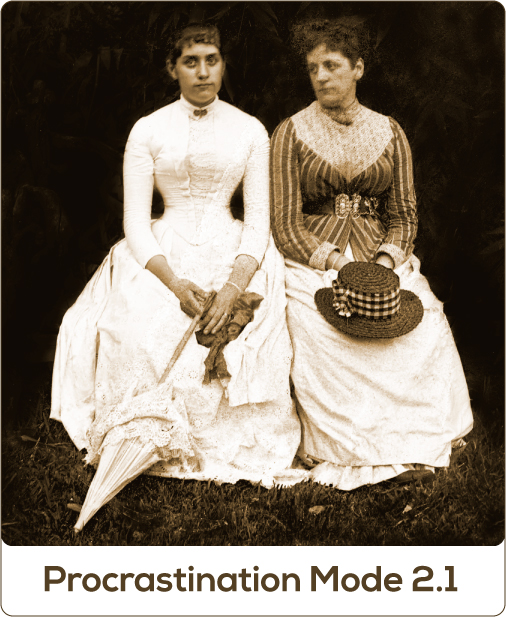 When I’m in procrastination mode, or for whatever reason I feel like absolute crap, that’s when it’s time to channel negative energy into a session at the gym. This is an excellent method of deferring any task. Also, it’s interesting to monitor how my feelings of displeasure and dread seem to melt away over the course of a 1-1/2 hour (give or take) workout.

Usually about this time, I realize that the best approach would be to simply work on the stupid thing, whatever it is, until it is done, so it won’t be hanging over my head like a cloud. A burst of energy, focus, concerted effort, and before long the task is done — not nearly so onerous as I was imagining it would be — and there’s a blissful sense of accomplishment.

Why do I procrastinate? I like to tell myself it’s because I’m such a perfectionist, that I don’t want to start something unless and until I can do it perfectly. Or, dear me, it’s fear of failure. But, when it comes right down to it, my motivation to procrastinate is, at the core, pure laziness, lazy to the bone, wanting to avoid work as much as possible.

Acknowledging this weakness, maybe I’ll be shamed into action and get going on a task that I’m currently putting off: Repotting plants to get ready for Spring! Not right now . . . but sometime this week . . . or next.