Zola Budd doesn’t usually spring to anyone’s mind when speaking of Olympic champions. In fact, the aura surrounding her appearance at the 1984 LA games was not inducive for victory. 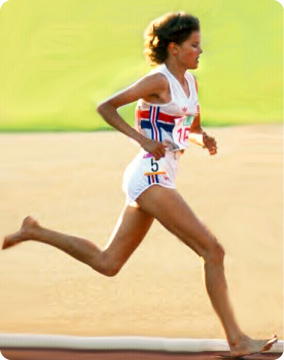 If anyone remembers Zola, it’s that she ran barefoot, was born and raised in South Africa, labelled by some as a supporter of the white racist regime. She was also called an opportunist, gaining British citizenship on the fast track in order to compete in the Olympic games. (South Africa had been banned from the games because of its Apartheid policies.) Actually, it was her father who was given 100,000 British pounds for the Budds’ exclusive story, together with the promise of citizenship.

While growing up in South Africa, Zola had a poster of Mary Decker hanging over her bed. Decker was also a middle-to long distance runner—and Zola’s hero. Little did Zola know that one day she’d actually have the chance to compete with Mary in the 3,000 meter race.

During that 3,000m race, Mary Decker—‘America’s Sweetheart’—gained the lead in the early stages of the race, with Zola running barefoot right behind her. After several laps round the track, Zola managed to pass Mary, and then the worst thing that could happen did—legs got tangled—Decker dropped, rolled off the track and couldn’t get back in the race. Zola maintained what looked like a good lead—to the sounds of jeering and booing from the crowd. However, she slowed her pace and eventually dropped pretty far back, finishing 6th or 7th.

Decker blamed her fall on Zola, and even the officials disqualified her—but then reinstated her when they looked at the footage of the incident. Runners behind Mary and Zola say that Mary’s foot came into contact with Zola’s—twice—before falling. And as she fell she reached out towards Zola and managed to rip the number off her shirt.

Yet no one came forward to defend Zola, and when threats were made on her life, she and her mother were whisked away by armed police officers and taken to the airport and put on the next plane to England.

Years later, why would I hold Zola in such high esteem? While watching the event I thought that she was innocent of malicious intent, conducted herself with dignity, (unlike Decker)—and continued to run successfully in competitions for awhile, and now just runs for fun.

I believe that the Olympic sports officials, and all the commentators, should remain as impartial as possible to avoid biased treatment. And the spectators? Zola Budd could have achieved a gold medal had she not been jeered and booed by the rabid crowds.