Are you feeling stressed, distraught, despairing, anguished, pressured, angry, and generally down? Obviously we all would rather feel happy, carefree and full of fun, but life seems determined to give us stress and sorrows.

I’ve been noticing lately that the prospect of having to do anything that I don’t consider FUN has a tendency to make me stressed, angry, and or depressed. Simplistically speaking, to get rid of whatever is stressing me, I guess I have to either jettison it out of my life or turn it into fun.

Often, stress and the munchies go together — my stress invariably goes up in the mid-to late-afternoon when I’m in calorie deprivation mode. But rather than encourage the (bad) habit of feeding my stress, I’ve learned to drink lots of water to abate the anguished feeling, and start preparing an early dinner for myself.

Often when I feel overwhelmed, it’s because I haven’t made a To-Do list capturing all the ‘stuff’ that I need to take care of, even the most trivial things like emptying the dishwasher. My stress is abated if I simply jot everything down on a scrap of paper, and happily cross things off as they’re eliminated.

When feeling particularly stressed-out, I tend to talk about it with pretty much anyone who will listen — it often seems like a good topic of conversation and a lot of people like being a sounding board. Stress is a topic that people can relate to, and they don’t usually mind offering their own experiences and ideas on the best ways to deal with stress.

Rather than letting stress get in the way of daily workouts, I have to remember that my top priority is working out and going to the gym. I’ve gotten into the habit of going into the sauna after showering at the gym and lying in this position — this is a super stress-reliever! 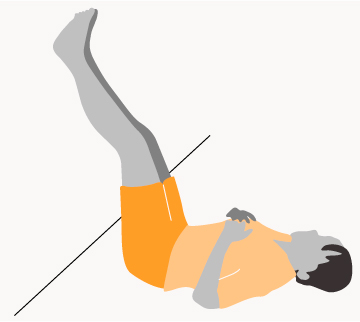