Last week, our Yoga instructor told us the moon’s in a phase which inspires de-cluttering, and she was taking the opportunity to clear out things and we should too, to promote a peaceful existence and right-mindedness.

Then she went on to rave about Project 333— Dress with 33 items or less for 3 months, rotating through the seasons (October 1 started a new cycle), and use the results to pare down (i.e., cleanse) your wardrobe. I immediately reacted with the thought that my wardrobe was already down to the bare bones. But, when I got home and inventoried just the tops/blouses hanging in my closet, I counted 45, and that’s not including the stuff in drawers — workout tops & jackets, T-shirts, sweaters. So, I guess I’m a candidate for Project 333.

My previous wardrobe purging efforts began in 2004, when I was bored during a business meeting and distracted myself by starting a list of clothes to get rid of. Here’s an extract from the top of that list:
Brown pants – Old, wornout, not flattering
Brown Blouse – Old
Beige Pants – Old, out of style
Pink Linen Blouse – Not flattering, spots
Black crepe elastic waist pants – Bad fit, cheap

Since then, I’ve continued listing the clothes I’ve given/thrown away, and I’m now on Page 16 (I’m tempted to count the items, but I’ll spare you that). I want to have ‘no regrets,’ so I include the reason(s) for jettisoning each item. So far in 2014 I’ve only listed about a dozen items. That means it’s time to focus on filling up the Goodwill bag. I like to keep a bag open and ready for donations in the corner of my clothes closet, reminding me of the goal of getting rid of things. Right now, there’s only some costume jewelry in it, but I promise to fill it soon.

On 2 occasions, I’ve held Garage Sales to get rid of all manner of junk that I’d accumulated. Thank goodness I had helpers.

Garage Sales are a ton of work for very little return. It’s a bummer when customers offer a pittance or outright turn up their noses and make a hasty exit.

Loads of stuff remained afterwards and had to be trucked to the thrift store. Some items were refused at that point, which was the ultimate insult. No more Garage Sales for me. Nowadays when I want to get rid of items too big for a Goodwill bag, I put them at the curb with a “FREE” sign, and they’re usually gone in a few days.

In the 2009-2010 timeframe (and sporadically thereafter), I sold stuff on Ebay and Amazon. This involved lots of effort — we’re talking dozens of items — books, china, gadgets, shoes, purses, jewelry, and of course, clothes. I even bought a mannequin so photos would turn out decent. 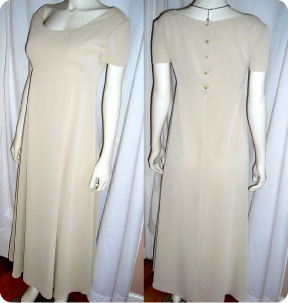 I netted just over $1,500 (yes, of course, I kept detailed records). Haven’t listed anything lately, because it just doesn’t pay off.

As I age, the sheer volume of my possessions becomes more nightmarish, and leaving the contents of my house for others to disposition would be an unspeakable burden. It would be so much better if I took responsibility for tackling the task of going through each item, deciding its fate, and muttering why the heck do I have all this crap and why didn’t I get rid of it a long time ago. Being in control of the fate of my belongings definitely has appeal. Yes, it’s time for me to get serious about this rest-of-my-life project, which will terminate when I do!