Every person on this good earth has their own scent, it’s in the mix of pheromones we give off, as individual as fingerprints. And yet, we’re exhorted to smell like anything rather than ourselves. From puberty onwards we’re given the lecture on body odor and how best to combat our natural stink with deodorants, perfumes, lotions, powder, essential oils, etc. So that’s what we’ll be talking about this week — signature scents. 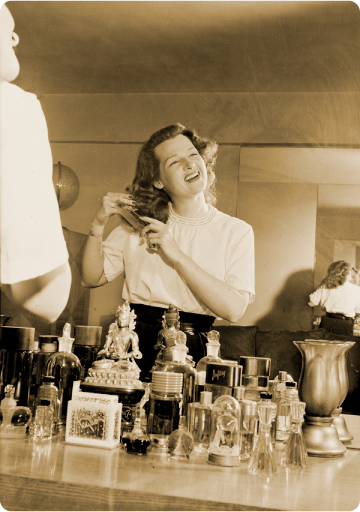 As a teenager my Dad and I would take the three dogs out for evening walks on nearby fields, a great way to unwind and let the critters run wild. They would run hither and thither, noses to the ground – searching for that eau de stink that only dogs can seem to find. If we didn’t catch them in time all 3 would roll around in the stink, teeth bared in ecstasy as they got as much of that foul stench on themselves as possible. Man, what a reek. So yeah, humans aren’t the only ones dousing themselves in scent as a way to feel good and carry about happiness!

Can you imagine what folks smelled like in the Middle Ages where baths were frowned on as promoting sickness? That’s why perfumes were invented, cause all those great unwashed folks stank to high heaven. Now however, we’re the cleanest peeps to ever walk the earth, with a dizzying amount of choices in what to smell like. I’m partial to perfume, but have recently found that my skin reacts badly, those chemicals make me itch. So, I’m finishing off the bottle on my clothes, and as a very nice air freshener, and then, who knows what I’ll smell like.