Collecting beach ephemera comes naturally to me, and I find it hard to resist an indigo mussel shell or well-smoothed piece of driftwood – despite the take nothing with you, leave it as you find it maxims that everyone now agrees is best for much-visited beaches. Why do I find the collecting impulse so hard to resist at the beach, and yet so easy when at the thrift store standing and looking at other people’s sad castoffs? And that’s what we’ll share this week – our history of collecting and maybe a glimpse of what amassed objects give us joy. 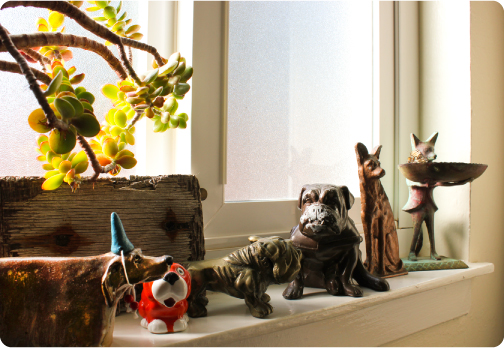 We moved around a lot when I was a kid so I don’t remember developing a hankering for accumulating stuff until I was out in the world by myself. My first collection started with one sapphire blue glass dog bottle – a dog with a lid for a hat, hard to resist. After that I kept an eye out for unusual pups – be they glass, metal, ceramic or plastic – I’d know which one wanted to come home with me based on, uh, based on, hmm – that it was cool, yo. The canine collection is a pack of about ten, and sometimes they’re out and about and sometimes they’re taking a rest inside another object I collect. 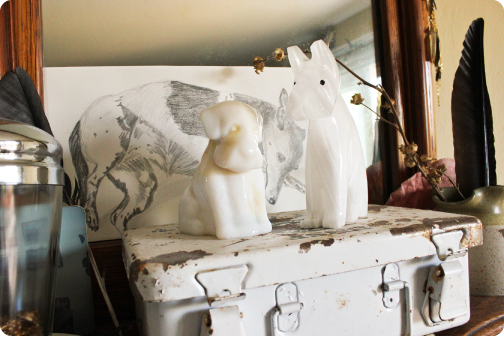 There was a period when if I saw a metal box I had to have it, luckily it wasn’t a break the bank obsession as no one wants these anymore. The reason behind this nutty need to stack boxes is elusive, I don’t even think psychologists can truly explain why we gravitate towards some objects while others leave us cold. Happily, I’m not indiscriminate anymore and the last one I acquired is a beaut from the 1940s, solid 3-drawered can’t-live-without-total-steal. 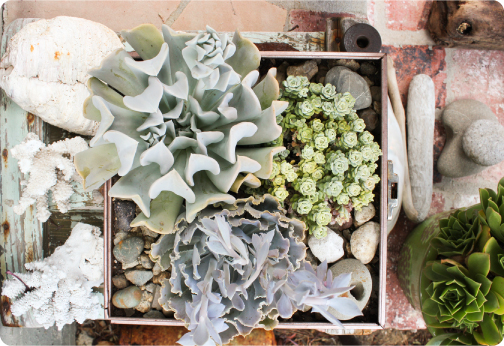 Oddly enough the last thing I collect is also inside a few metal boxes – the ones I turned into outside plant holders. While out running I uhm helped myself to snippets of succulents from different verges and so began another happy collecting adventure, helped along by a rather spectacular birthday present of many beautiful varieties. What can I say, they’re drought resistant, come in beautiful shapes, colours and sizes – who can resist?