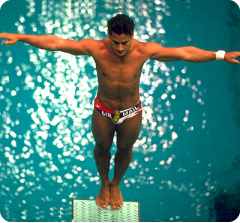 When this week’s topic posted, the first name that popped up in my brains was Greg Louganis. I recall him smacking the back of his head on the springboard and my mum complaining about the network showing the accident over and over. The 1988 Olympics in Seoul, South Korea — Greg Louganis won gold in both 3m springboard and 10m platform that year despite the bump to the noggin. He’d also won those same gold medals in 1984 in Los Angeles. Très snazzy diver.

Other names that I associate with my first taste of the Olympics are Carl Lewis, Jackie Joyner-Kersee, and Flo Jo Nails (I thought both those chicks were awesome, but Flo Jo was by far more impressive with her nails!) it was also the year for Mary Lou Retton. So 1988, being my first Olympic Games to watch and looking back- is my fav. And Greg Louganis bouncing back (pun intended) from his head+spring board collision to win gold is the ultimate athlete for me.