Since time immemorial Chicken Little has been saying the sky is about to fall, that disaster is looming. And his cousins in apocalyptic-loving Hollywood would have us believe through TV & films that our time on earth is indeed drawing to a close. So, what’s a girl to do? Well, this week we’re sharing what’s in our survival kits: how we prepare for disasters, man-made or otherwise.

It’s hard not to think that Mother Nature is really pissed at humans, like more than usual. What with killing viruses, floods, hurricanes of increasing magnitude, wildfires, years-long droughts – I think she’s trying to tell us something. Now, don’t get mad, but maybe she thinks humans are ripe for culling. Maybe she uses the same logic that we do when we look at animal populations that are overwhelming their natural environment, and decide something must be done. I was a kid when they culled elephants in my country, people were outraged. Not so much though when the same thing was done to deer. So, if we applied the same logic to ourselves, the worst destroyers of the environment, are we due for culling? Chicken Little, Hollywood and Mother Nature appear to think so.

I’d be lying if I said I had a survival kit. I come from the ostrich-head-in-the-sand school of preparedness: if I don’t think about it, it won’t happen. How ’bout you? Do you have: first-aid kits, water, food, clothing, flashlights, batteries, wind-up radio, blankets, medications, pet food, wet wipes, loo roll, survival manuals, seeds to grow food, knives, guns, a bunker, off-the-grid friends, gas masks, etc.? Now you see why I make like an ostrich. 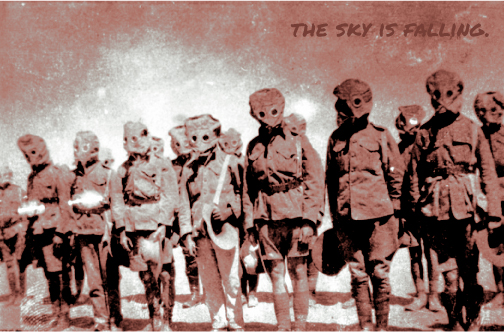 So, the way I prepare for disaster is to think: am I using my time wisely? If I die sooner than expected will I be buried with way too many regrets, or not? If Chicken Little is right and the sky is falling, I want to love any moments I have left, fill them with joy, kindness and love, not hoarding, suspicion and fear. I’ll carry on with that old refrain in my ears: Get busy living, or get busy dying.