If we’re going to talk about clean slates then I think some examples of folks who’ve made good use of a new start are in order, yes? My favourite and first that popped to mind is the queen of rock n roll, Tina Turner. She split from her abusive husband, Ike Turner, and with a lot of hard work made her own comeback and held sold out concerts, starred in movies, wrote her autobiography and won a few Grammy Awards along the way. So yeah, I’d say Ms. Turner’s the queen of knocking it out the park with the use of her blank slate.

I’ve said previously that Nelson Mandela is one of my role models and he’s had probably the most famous clean slate in history with winning South Africa’s first post-apartheid elections in 1994. Talk about a blank slate, he was able to write racist-free government policy for the first time in his country, and to set South Africa on a new course with the help of all his duly elected cabinet members. Thanks for all your hard work, Madiba.

And sometimes a clean slate happens after a horrific event and that’s why I’m including Jami Goldman here. She lost her legs below the knee after being trapped in her snow bound car with a friend for 11 days with very little food and water. After the trauma, recovery and going back to college she found her way to running with a pair of Cheetah legs, and went on to set world records, win medals and run a half-marathon. So, tough, resilient and smart she’s made full use of her rather unusual clean slate. 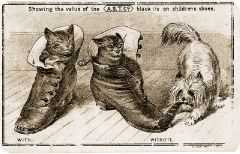 Just in case you were thinking only humans get clean slates, I’ll make a pitch for all the animals in shelters who once adopted start out with a blank slate, and it’s up to their new friends to train them into new habits and to encourage loving behaviors. About 20% of the 83.3 million owned dogs and 26% of the 95.6 million owned cats in this country were adopted from shelters, so, we’re talking in the millions here folks – all those clean slates, quite amazing.